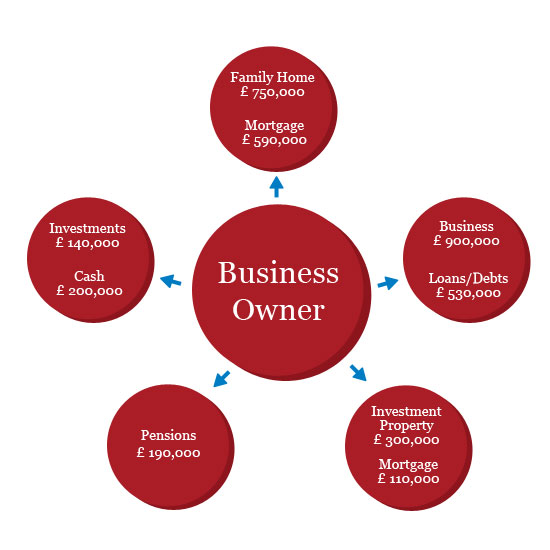 Age 54 and 49, married with 3 children, two of whom are at university . . . the youngest child is to attend university in 2010 after a year out travelling.

He lives and breathes his business, which has recently been affected by the 2008 credit crunch.

This has disturbed them to the degree that all their financial affairs might not be as rosy as they have thought. Like some of their friends, they too have been reliant to a significant degree on their borrowings, which have been eased by the rises in house prices in the past. This has enabled them to lead a high quality lifestyle which includes paying university fees amounting to £14,000 per year.

Their bank wants the business debts to be refinanced on tighter terms. Extra borrowing has been ruled out

To spend more time at home with his wife and family

To go travelling together

was based around their own values of what money means to them;

established their goals, objectives and aspirations;

enabled them to understand their current assets and how they work now and will do so in the future;

showed them at what age, based on their desired lifestyle, they will “run out” of money;

showed them what they will need to do, in order to maintain that desired lifestyle so they will never run out of money;

Rearranged their personal residential loan liability in a more tax efficient manner . . . by recommending a different institution to discuss the possibility of refinancing existing debts in a more cost effective manner

Designed a bespoke investment strategy that would rebalance their existing investments and pensions in line with their individual objectives and risk tolerances . . . gave each need a risk level and target growth rate . . .  organised all the investments in a way that enabled them to be in control and pay lesser charges

Referred them back to their solicitor to update their Will which would ease the IHT burden by . . .  creating a discretionary will trust . . . insuring against the remaining liability

The Results for them

The financial organisation and prioritisation helped them to get a clear picture as to how they are positioned and what they are going to have to do in order to attain their future dreams.

The refinancing of the debts resulted in a saving of over £1,300 per month

The financial plan showed that he can relax, work less and spend more time with his family as he wanted to do

The accountants approved the tax strategy which meant he had spare capital to . . . give his youngest son should he be accepted into Oxford . . .  go on a holiday of a lifetime in 2010 with his wife 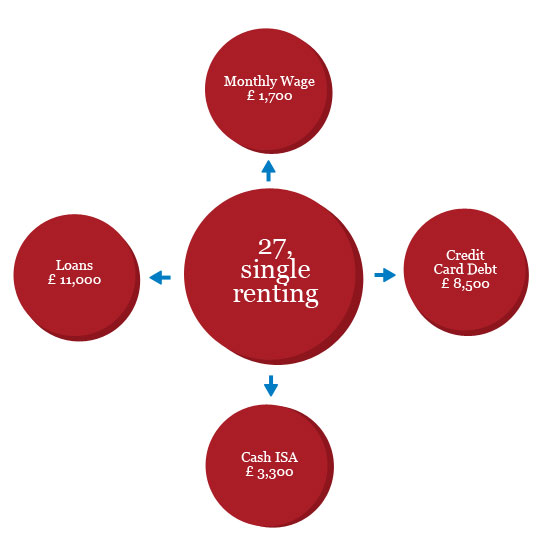 Age 27, single and getting settled into her career as an accountant at one of the top 3 institutions. About to complete the final phase of the ACA exams which, once passed, will make her a chartered accountant.

In addition to completing her exams, she has made it clear that she wants to buy a house as she feels rental money is a waste.

Although she has not found a suitable partner, she does express a desire to have children at some point in the not so distant future. It appears that work has taken control of her life to an extent that time has not been on her side to socialise and meet new people.

As our conversation develops, she reveals the reason why she works so much. It is because she wants to “feel that there is enough money”. Enough to be able to decide what she wants to do, and when. Just like looking in the mirror, she hasn’t taken a good look at her own finances. It becomes apparent that what is inhibiting her pursuits are her significant credit cards debts which, at first, seemed embarrassing for her to even talk about.

The focus has been on work. Career, qualifications and promotion have taken a priority to an extent that work/life balance has been all around her job

This lack of money makes her want to work harder… to the point that socialising is secondary to career.

Rental money is a waste in her opinion

Needs a significant sum to buy a house

Unsure of the employee benefits on offer and what to chose

To build up a deposit to buy a house

established her goals, objectives and aspirations;

detailed her income and expenditure pattern, highlighting where the majority of the money was going. On an annual basis, this showed that there was, in fact, spare capital which appeared to be going to waste;

reassured her that it was ok to have these debts as they were from her student days;

recommended that she repay these credit card debts with one loan from a bank. drafted a letter to the bank justifying the debt transfer and her ability to make the repayments;

recommended what employee benefit package she should ask her employer for once she passed the final exams;

The Results for her

The financial organisation and prioritisation helped her to understand herself better. It had the effect of a mirror. Until seeing it, she was not able to pinpoint what her finances looked like.

The refinancing of her debts resulted in a saving of over £1,600 per year. This enabled her to maintain her repayments which would see her loan be repaid in 5 years 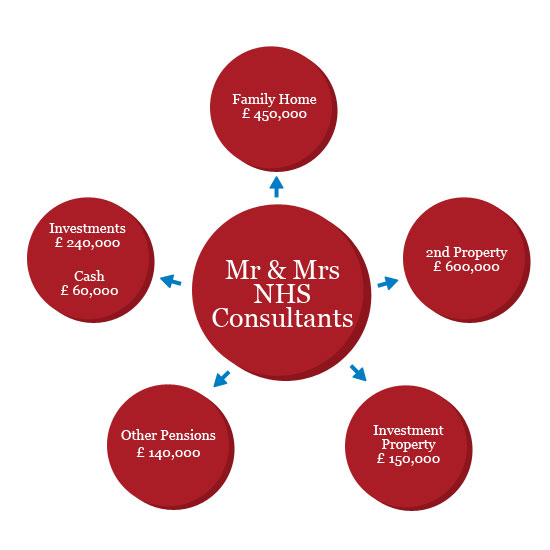 Age 57 and 55, married with 2 children, the youngest being at university.

A doctor with significant experience in the NHS and also having the luxury of being able to earn a secondary income by offering his expert opinions on medical cases. After a mild health scare, he has decided he should spend more time doing the things he values the most: being with his family and tracing his routes which span 3 continents.

His wife has not worked for some time. As the main breadwinner he wants to ensure that his wife and children will be looked after should anything happen to him. Throughout the years he has been saving and saving, much to the point he has no clear idea where anything is.

They have two debt free properties worth around £800,000 in total.

To compensate, they have put money into most types of investment vehicles

The liability to inheritance tax

To be able to understand their current financial position

To know how retirement will alter their finances and lifestyle

To take steps now which will bypass inheritance tax (IHT). Gifting is an option but they want to retain control of the gifts

To give something back to the community through charitable planning

Identified their own values of what money means to them;

was based around their values;

established their lifestyle requirements both now and in retirement

showed them that if they were to stick to their desired lifestyle, they had enough assets (including the NHS pension) meaning that they would never “run out” of money;

illustrated how gifting via certain trusts could reduce the IHT liability, whilst still allowing them to retain control of the gifts

Designed a bespoke investment strategy that would rebalance their existing investments in line with their desired lifestyle….allowed them to log on to a website and be able to see their total investment value in one go and at any time

Referred them to a solicitor to update their Will which would ease the IHT burden by creating a discretionary will trust . . . and for a second opinion on the appropriate gifting strategy via trusts

The Results for them

The financial organisation and prioritisation helped them to get a clear picture as to how they are positioned and what they can do with all the assets they have. This also took into consideration the potential vulnerability if he was to retire early due to ill health. Both these scenarios, illustrated graphically, gave them confidence in their overall bespoke strategy.

The financial plan showed that he can relax, work less and spend more time with his family as he wanted to do

The inheritance tax saved amounted to over £160,000 . . . the solicitor was happy to draw up a discretionary will trust and comment on the gifting which gave them extra reassurance

The accountant approved the tax strategy which meant he received a lump sum rebate of over £24,000 several months later.

The reorganising of the investments and viewing their financial plan gave them a clearer picture of their purpose. The ability to go online and see the total value of the portfolio together with its various constituents put them in a position of control.

Appleton Gerrard Private Wealth Management is authorised and regulated by the Financial Conduct Authority (FCA). Kusal Ariyawansa, Chartered Financial Planner and Chartered Wealth Manager and Branch Principal. FCA no. 624553. The FCA does not regulate Wills, legal and accounting advice and some forms of trust and tax planning.